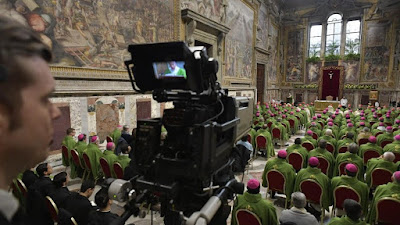 As previously noted, it is exceedingly uncommon for the Pope to celebrate a Mass devoid of preaching it. Accordingly, Francis’ decision to delegate the homily for this summit’s closing liturgy would’ve been substantial in any context, but doubly so right here.

And that is even prior to one particular considers the import of who the pontiff tapped to speak in his stead.

Although he’s develop into fairly recognized across the English-speaking planet for his outspokenness in the wake of a years-extended national inquiry on abuse in the Australian church, in a prior incarnation, Archbishop Mark Coleridge of Brisbane was in the belly of an additional proverbial “beast” connected to the abuse scandals – in 2002, the then-monsignor was assigned to the English-language desk of the Secretariat of State, later admitting to how he came to see the Vatican’s handling of the initial US crisis far more as a cautionary tale than any type of historic stride.

Back to the present, meanwhile, Coleridge has taken the lead function in the organizing for a uncommon Plenary Council of the Australian church subsequent year – on a national level, the type of thorough-going, synodal response which this week’s occasion was meant to highlight. (Right here, it bears recalling that, in the wake of 2002, a handful of US bishops known as for a plenary council for the Stateside church – what would’ve been the very first such gathering because 1884’s Third Council of Baltimore. The concept was immediately declined by the bench’s leadership.)

As that combined context most likely informed the Pope’s decision of the Aussie president as this closing day’s lone speaker apart from himself, here’s Coleridge’s homily from this morning’s rites in the Sala Regia of the Apostolic Palace.

He speaks to us of energy, and he does so in this splendid Sala Regia which also speaks of energy. Right here are pictures of battles, of a religious massacre, of struggles among emperors and popes. This is a location exactly where earthly and heavenly powers meet, touched at occasions by infernal powers as properly. In this Sala Regia the word of God invites us to contemplate energy, as we have carried out via these days with each other. Among meeting, Sala and Scripture for that reason we have a fine harmony of voices.

Standing more than the sleeping Saul, David seems a potent figure, as Abishai sees only also properly: “Today God has place the enemy into your hands. So let me nail him to the ground with the spear”. But David retorts: “Don’t kill him! Who has ever laid a hand on the Lord’s consecrated one particular and gone unpunished?” David chooses to use energy not to destroy but to save the king, the Lord’s anointed.
The pastors of the Church, like David, have received a present of energy – energy having said that to serve, to produce a energy that is with and for but not more than a energy, as St Paul says, “which the Lord gave for creating you up, not for destroying you” (two Cor 10:eight). Energy is risky, since it can destroy and in these days we have pondered how in the Church, energy can turn destructive when separated from service, when it is not a way of loving, when it becomes energy more than.

In abuse and its concealment, the potent show themselves not guys of heaven but guys of earth, in the words of St Paul we have heard. In the Gospel, the Lord commands: “Love your enemies”. But who is the enemy? Certainly not these who have challenged the Church to see abuse and its concealment for what they truly are, above all the victims and survivors who have led us to the painful truth by telling their stories with such courage. At occasions, having said that, we have noticed victims and survivors as the enemy, but we have not loved them, we have not blessed them. In that sense, we have been our personal worst enemy.

The Lord urges us to “be merciful as your Father is merciful”. However, for all that we want a really secure Church and for all that we have carried out to make certain it, we have not usually selected the mercy of the man of heaven. We have, at occasions, preferred rather the indifference of the man of earth and the want to shield the Church’s reputation and even our personal. We have shown also tiny mercy, and for that reason we will acquire the similar, since the measure we give will be the measure we acquire in return. We will not go unpunished, as David says, and we have currently recognized punishment.

This conversion alone will allow us to see that the wounds of these who have been abused are our wounds, that their fate is our fate, that they are not our enemies but bone of our bones, flesh of our flesh (cf Gen two:23). They are us, and we are them.

This conversion is in truth a Copernican revolution. Copernicus proved that the sun does not revolve about the earth but the earth about the sun. For us, the Copernican revolution is the discovery that these who have been abused do not revolve about the Church but the Church about them. In discovering this, we can start to see with their eyes and to hear with their ears and after we do that, the planet and the Church start to appear really various. This is the essential conversion, the accurate revolution and the wonderful grace which can open for the Church a new season of mission.

In these days we have been on Calvary – even in the Vatican and in the Sala Regia we are on the dark mountain. In listening to survivors, we have heard Christ crying out in the darkness (cf Mk 15:34). And the cry has even develop into music. But right here hope is born from his wounded heart, and hope becomes prayer, as the universal Church gathers about us in this upper space: may well the darkness of Calvary lead the Church all through the planet to the light of Easter, to the Lamb who is the sun that by no means sets (cf Apoc 21:23).

In the finish, there remains only the voice of the Risen Lord, urging us not to stand gazing at the empty tomb, asking yourself in our perplexity what to do subsequent. Nor can we keep in the upper space exactly where he says, “Peace be with you” (Jn 20:19). He breathes on us (cf Jn 20:22) and the fire of a new Pentecost touches us (cf Acts two:two). He who is peace throws open the doors of the upper space and the doors of our heart. From worry is born an apostolic boldness, from deep discouragement the joy of the Gospel.

A mission stretches prior to us – a mission demanding not just words but true concrete action. We will do all we can to bring justice and healing to survivors of abuse we will listen to them, think them and stroll with them we will make certain that these who have abused are by no means once again capable to offend we will contact to account these who have concealed abuse we will strengthen the processes of recruitment and formation of Church leaders we will educate all our individuals in what safeguarding demands we will do all in our energy to make positive that the horrors of the previous are not repeated and that the Church is a secure location for all, a loving mother specially for the young and the vulnerable we will not act alone but will perform with all concerned for the great of the young and the vulnerable we will continue to deepen our personal understanding of abuse and its effects, of why it has occurred in the Church and what will have to be carried out to eradicate it. All of this will take time, but we do not have forever and we dare not fail.

If we can do this and far more, we will not only know the peace of the Risen Lord but we will develop into his peace in a mission to the ends of the earth. However we will develop into the peace only if we develop into the sacrifice. To this we say yes with one particular voice as at the altar we plunge our failures and betrayals, all our faith, our hope, our like into the one particular sacrifice of Jesus, Victim and Victor, who “will wipe away the tears from each eye, and death shall be no far more, neither shall there be mourning or weeping or discomfort any far more, for the former points have passed away” (Apoc 21:four).