Invisible black holes throughout the fabric of space-time have been the stuff of science fiction books and movies for decades.
They are fiction no more. On Wednesday, a team of scientists released the first image of a supermassive black hole, showing a dark ring defining the hole surrounded by the event horizon, a fiery orange of superheated gas and dust where some light can still escape. ~ VLA research contributes to 1st image of black hole, April 10, 2019.

This morning, I woke up to find the first image ever of a black hole – this particular black hole being a super-massive black hole located at the center of a galaxy called Messier 87, or M87, a mere 55 million light years from Earth. Of course, the photo had already been all over the Internet the prior day, so although the image is spectacular and a great technological feat, the news was no longer surprising. But what caught my attention this morning was the introductory language from the article that I have quoted above. 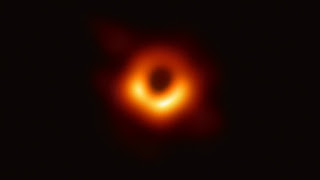 To me, this article reveals the way that many people think. Notice that the article suggests that black holes were “stuff of science fiction,” i.e., they were just speculation that may or may not be possible. But suddenly, when we have an image of the blackhole, it is no longer just speculation. It is now fact.

What this language reveals is that for a lot of people, seeing is believing.

Of course, there really has been almost no doubt about the existence of black holes for many, many years. I have not seen any articles or papers arguing that black holes didn’t exist for as long as I can remember because the evidence for the existence of such exotic entities has been strong for many, many years. But until the images showed up, to some people there were still questions about their existence. They needed the image to “prove” that black holes existed.

That’s true about God, too. There is lots of evidence for God’s existence, but to some, it simply isn’t enough. They need to see God to believe in Him (and even then, many would discount the “seeing” as a hallucination – but that’s another story for another day). I understand. I know that many people who are Christian doubt at times because they cannot reach out and touch God. Seeing something for oneself solidifies belief in that thing. (Ask Thomas.)

But just like the evidence can convince us that black holes existed without having to have the spectacular images on our front page or Internet news sources, we don’t have to have to be able to see God’s hands with our own eyes or reach out our hand and put it into His side to know that He exists and that He loves us. The evidence is wide and strong that support the acknowledgement that He exists.

The eminent C.S. Lewis wrote, “I believe in Christianity as I believe that the Sun has risen not only because I see it but because by it I see everything else.” At the risk of being seen as claiming a higher mantle than I deserve, I would amend it slightly for this purpose to read, “I don’t have to see the sun itself to believe it exists because it is only by its light that I know I can see everything else.”