40 to 70 years after Jesus died, a few followers tried to capture his words and acts—we call them the Gospels

In Episode 3, that we posted last week, we related a story of how a chronicler of Martin Luther King Jr. (trying to put together a ‘gospel,’ meaning ‘good news’ similar to what Matthew, Mark, Luke and John did 2,000 years earlier), might include the quotes of the great man that the gospel writer most wanted MLK to be remembered by. And, of course, that gospel would most certainly coincide with the gospel writer’s own beliefs or cultural conditioning. We might also imagine that the writer could possibly choose to ‘forget’ to include those sayings of MLK (in the same way that Jesus’ chroniclers did). I can’t emphasize enough that we remember (according to biblical scholars), Jesus never wrote down a single word, so we have to rely totally on later-day followers and scribes who each lived in different parts of the world and came from diverse backgrounds, and wouldn’t set down the stories (writing only in Greek, not Hebrew or Aramaic, the language that Jesus and his disciples spoke) for decades after he died.

​Thus, we have to allow some leeway here for the oral tradition to mature or morph over the decades after Jesus died before someone decided to finally write down the traditions about him that they had heard. Thus there are differences and conflicts between the various accounts, which is to be expected.

Add in the fact that just before the first Gospel (Mark) was penned (roughly 40 years after Jesus died), the Romans invaded Israel and Judea and killed huge numbers of the population (including followers of Jesus); and, those that they didn’t kill outright in the Great Jewish War, they hauled off into slavery—20,000 of them! 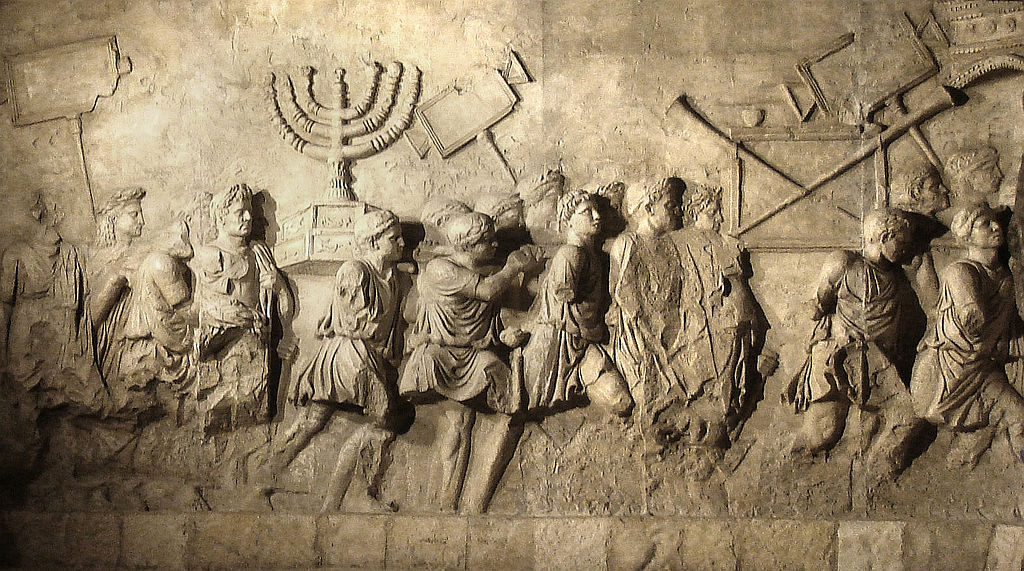 The Arch of Titus. The emperor entering Rome with the Jewish Temple treasure, along with 20,000 Jewish slaves

Thousands of the survivors were marched through the streets of Rome and are pictured in the great Arch of Triumph in Rome, along with the golden Menorah. We are lucky that we have any written documentation at all after that cataclysmic event that affected every Jew (and followers of Jesus) in the empire. In fact, the coliseum was largely built by the Roman emperor, Vespasian, with the money he confiscated from the Temple in Jerusalem, and constructed with the labor of Jewish slaves captured in Judea. As if conquering Jerusalem wasn’t enough, he destroyed the Temple completely, along with most of the city. So great were the riches of the Temple at the time of Jesus that many of the stones were covered with gold to dazzle all who saw this building (it was one of the seven wonders of the ancient world!). The soldiers tossed the stones off the Temple Mount, and even took the gold encased stones of the Temple, heated them, and collected the gold that melted away from them.

If we return to our real-life example of MLK, and we are trying to put together our ‘gospel’ account, then at some point we have to pick and choose the sayings of his to pass on to future generations. If we had come from poverty and lived through the 60’s and participated in, or sympathized with, the black freedom struggle in the South then we would definitely want to include some of these quotes.

If we hadn’t personally lived with, or hadn’t been affected by the segregated schools, the lunch counter sit-ins of the 60’s, the “white only” facilities, or the requirement to sit in the back of the bus; if we hadn’t witnessed the burning crosses and the white sheets, then we might shy away from those quotes in our MLK gospel. After all, over 40 years have passed; evil recedes from our memories, which makes those atrocities not as real, eminent, and scarifying as they once were as they fade from our consciousness. We might decide we want to stick with the sayings that are filled with love, not conflict—not the overturning of the status quo, which no longer exists.

Now, today, if any one of these thoughts from MLK make you a little uncomfortable, recall that it was the same with some of the teachings of Jesus; thus, some of the uncomfortable sayings of Jesus were left out in some of the Gospels, they were modified by others by just a word or two (which often changed the meaning completely), or were placed into alternate scenarios that now seem to sit awkwardly positioned in the stories that survived. Remember, I am not even mentioning the over 30 other Gospels that we now know were being circulated in the early days of Christianity that were not chosen to be included in the New Testament—some as popular and as ancient, and at one time as ‘authentic’, as the four that we ended up with.

These Gospels were declared to be heretical and burned, banned, or mocked into oblivion by the church that we all inherited. I’m referring to the Gospels of Mary, Judas, Thomas, James, Egerton, Oxyrhynchus, the sayings Gospel of ‘Q’, Peter, the Secret Gospel of Mark, Secret Book of James, Dialogue of the Savior, and the Infancy Gospels of Thomas and James, and more. Wow!

Some of these Gospels were as popular and as old as the Gospels that finally made it into the New Testament. How many Christians know that? How many know why there were only four Gospels, or how the ones we now revere even made the final cut and were included in the New Testament? How many of us know that half the letters of Paul weren’t even written by him; they were forgeries and latter-day propaganda pieces. Paul even warns his people against them because some of them were openly being circulated during his lifetime—yet they are still quoted every day from the pulpit as if they were genuine, and the revealed Word of God.

So, who is the real Jesus, the real Paul, and what did they teach? Let’s take a closer look in the next Episode. Have a wondrous day! And, remember…

​To be continued with Installment 5