hen you first meet this guy named Joshua, you’d never know that he’s been in the mouth of a lion.

What do you say to a man who’s walked out of the mouth of a lion? Only to give his entire life to the Lion and the Lamb?

You’d never have the faintest idea that lion teeth slammed down on his waist while he was just a kid sleeping out in the wilderness with his herd of goats.

Clenched between the incisors and canine teeth of the lion, Joshua found himself dragged into the bush, braced to be ripped apart for a pulpy nocturnal feast for the beast.

And in the split second that the lion dropped the mangled boy to get a better grip, the kid’s barking dog lunged in between the lion and the boy, growling and snarling, holding the lion at bay until near-by goat herders snapped awake and dragged the barely-alive Joshua out of the lion’s deadly reach. 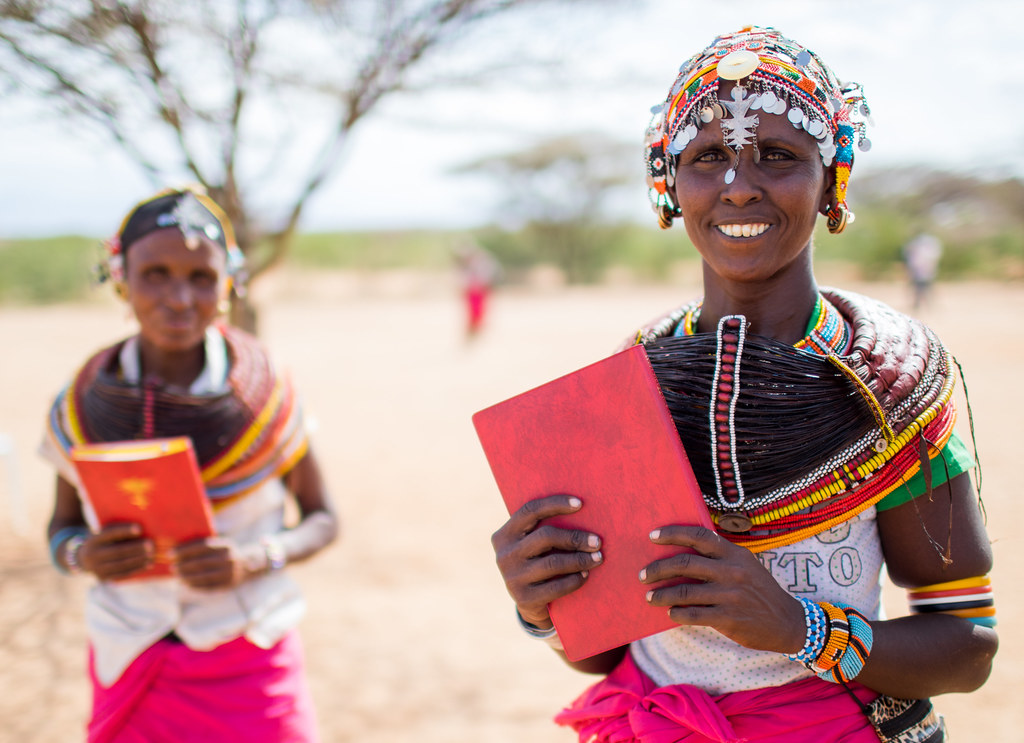 The boy lived to become a scarred man. What do you say to a man who’s walked out of the mouth of a lion? Only to give his entire life to the Lion and the Lamb?

“Why?” I ask Joshua standing there in the wilderness, holding the reins of a camel. “Why — give your entire adult life, nearly the last three decades of your life, to translating the Bible into the language of your people?”

Joshua leans forward. “It is like giving them a weapon.” He points to a tree where women in these stacking rings of glorious, rattling beads are gathered under its branches.

Because you have to beat back your lion attacks, because “your adversary the devil prowls around like a roaring lion, seeking someone to devour.”

Joshua holds up a Bible.

How would everything in this tilting world stand stronger if the Word of God laid more open for us than closed?

“This is — powerful. The weapon is God’s Word. Now, we can be equipped. But the problem is now — we need the other bigger part of the weapon. The Old Testament. We also need the Old Testament.”

Apparently that guy, Luther, who had a penchant for nailing things down, he up and said that: “the entire life and being of the church lie in the Word of God.”

Which kinda leads you to look in the mirror and straight up ask:

How would everything in this tilting world stand stronger if the Word of God laid more open for us than closed?

The way you close the mouth of any lion about to devour you — is to open your Bible.

What if…. so this is what happened:

Near the beginning-ish of Lent, I begin at the beginning of the New Testament, the book of Matthew. (So, it took me awhile to get my bearings, there on the edge of my own Lenten wilderness.)

I lace up a a pair of beat-up old black knock-off Converse runners that I’d found on some clearance shelf. Pull on tangled headphones. Open up the Word.

The way you close the mouth of any lion about to devour you — is to open your Bible.

And I walk, while I listen to the Word, while I read the Word. Walk 6500 steps. While listening to, and while simultaneously reading too, at least 7 chapters of Scripture. 25 minutes. The Word heard and burned into the pounding heart.

The expanse of the New Testament in 40 days. 25 minutes a day, 7 chapters a day — the number of perfection for the falling and imperfect.

130 miles of walking with God through Lent, through the New Testament.

They say, on average, 3 hours a day is spent reading text on our phone screens — and it only takes 1/7th of that time — 25 minutes — to read 7 chapters of the text on the Sacred page?

There are seasons that are for lingering with a string of verses, meditating on only a stanza or two of Scriptures, dissecting a run of lines, studying the beat and rhythm of the language, of every otherworldly word.

And then — then there are seasons to saturate in the whole symphony of Scripture at full volume, read at full tilt, a listening of whole movements while walking, moved by Him, moving with Him.

Lent loans you space to walk longer with God.

Having walked this Lent with the heart song of God through the expanse of Matthew, Mark, Luke and John, and now mid-way through Acts, I dare hope for a gait growing in brave grace. Dare to believe:

Have a life-grip on the Sword of the Word — and you slay the worries that have a death-grip on your heart.

“You ever get out of bed and ask “Why me, Lord?” I ask Joshua under the beating sun.

“Why do you think God called you? He could have picked anybody from the Rendille people to translate His Word for these people —and He called you — to give almost the last 30 years of your actual life to His Word….”

The goal isn’t a place — the goal is a Person. God is the Goal.

What if we changed our destination goals — so that God is the goal?

“I believe He has put me here because He wants to walk with me,” Joshua is nodding, gripping his walking stick, and I read the man:

The goal isn’t a place — the goal is a Person. The goal is the Presence of your Provider, your Peace, your Purpose, your Person… your Jesus.

The goal isn’t walking to somewhere — as much as it is walking with Someone.

God is the goal.

There is only One who can intercept what’s coming after you and keep you alive.

There is only One who can keep what’s hunting you down at bay.

The third week of Lent, walking, reading, listening through 7 chapters a day, the Gospels made into muscle and sinew, and now walking through, the book of Acts, I look up and there it is, about as clear as day:

Scripture makes a soul strong, like you’re being given the strength to spear fears.

Follow the lines of words, and they will show you the Way. The Way forward, the Way through, the way Home — the way to survive lions.

Standing there, looking into the strength there in Joshua’s eyes, I decide right there that I am done with “devotions,” won’t ever have “devotions” again. Because I can see it in the eyes of Joshua, of Ndubayyo, of the dancing Rendille women of a million beads:

God is a roaring holy fire and He burns up any neat boxes labelled “Quiet Time.” He will settle for nothing less than a holy Encounter.

God doesn’t want to be a number on a to-do list: He’s longing for a holy Encounter.

God is a roaring holy fire and He burns up any neat boxes labelled “Quiet Time.” He will settle for nothing less than a holy Encounter.

Open the Word and you see God saying it right there: “Turn — look Me in the eye.” *

Open the Word and look God straight in the eye — and let Him speak straight to your heart.

Open the Word, look God in the eye — and you can stare down anything threatening your heart.

I think that, when I reach to shake Joshua’s hand, the hand of the man who escaped the mouth of a lion, who walks now with the Word from the Mouth of God — how you can undeniably see it in his eyes — how his soul’s grown strong from looking straight into the eye of the Lion of Judah.

Open the Word, look God in the eye — and you can stare down anything threatening your heart.

Under a tree in the distance, a circle of women are devouring His Word like lionesses…. and I can’t look away.

Just $35 for one verse. And you would get to partner with translators like Joshua to help a soul find Jesus. Walk with God this Lent. Look Him right in the eye. And give one verse to a people group who need God’s Word to survive lions. 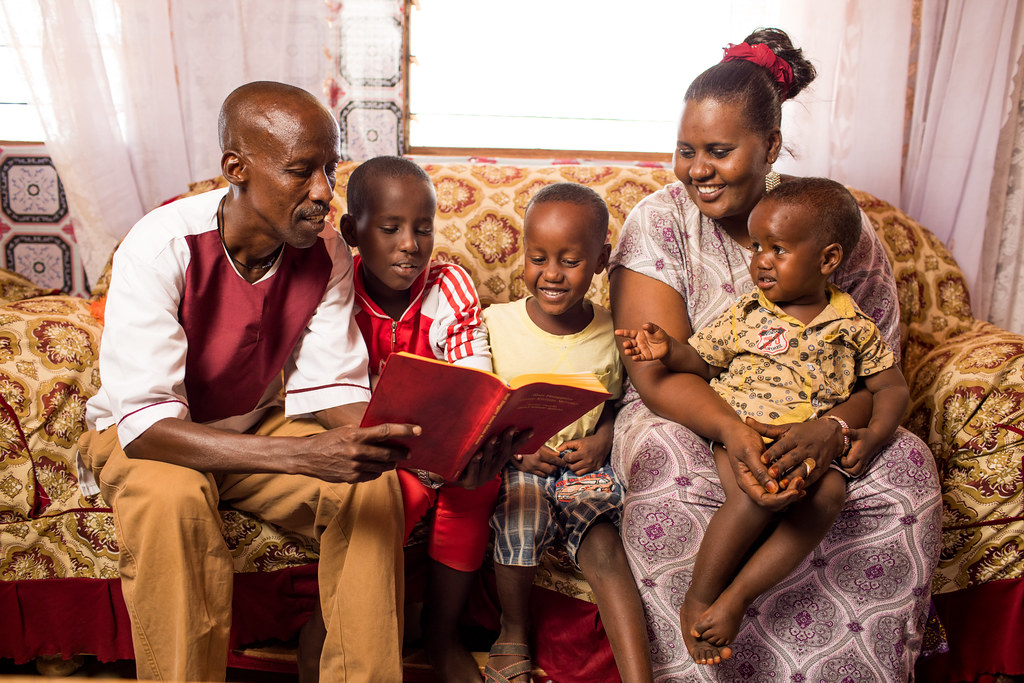 Want a Lent of More? How to have a Lent of Abundantly More God (Part 1)

How to Keep Your Life from Imploding: A Lent of More God (Part 2) (And What Is the Most Important Work You Can Invest In to Change the World)

This Lent: Give up — whatever you need — to hear God speak: 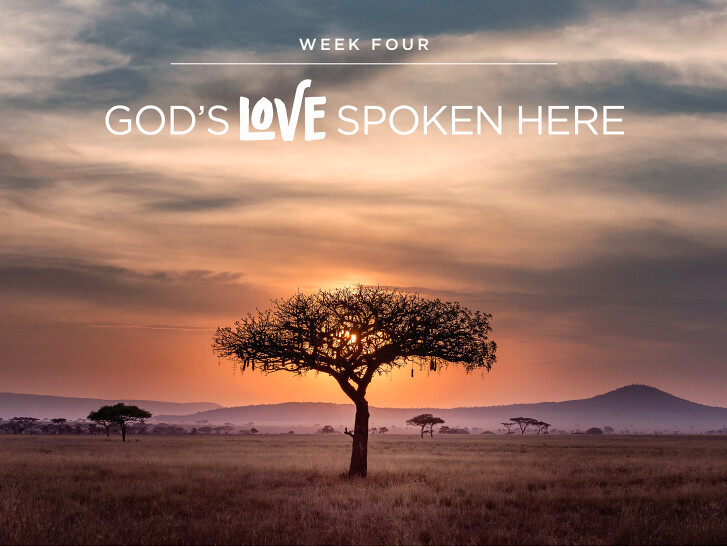 Speak Words of Life Over Your Home

Start a 7-week journey with us in partnership with The Seed Company this Lent & receive DAILY encouragement around God’s Word.

Apply practical steps to bring God’s presence, God’s Word into your home. Reflect through guided questions, and involve your people in creative ways.

Give up what is lesser — to get more of the Greater.

(*Theologian & Bible scholar, Amos N. Wilder, wrote of Scripture: “It is as though God says to us one by one: ‘Look me in the eye.’”)