Adonai saw that Leah was unloved, so He made her fertile,
while Rachel remained childless. Leah conceived and gave birth to a son, whom
she named Reuven [see, a son!], for she said, “It is because Adonai has seen
how humiliated I have been, but now my husband will love me.”  She conceived again, gave birth to a son and
said, “It is because Adonai has heard that I am unloved; therefore he has given
me this son also.” So she named him Shimon [hearing].  Once more she conceived and had a son; and she
said, “Now this time my husband will be joined to me, because I have borne him
three sons.” Therefore she named him Levi [joining]. She conceived yet again,
had a son and said, “This time I will praise Adonai”; therefore she named him
Yehuda [praise]. Then she stopped having children. Bereishit / Genesis 29:31-35

The story of Yaakov and Rachel is really beautiful. A true
love story. With a little insignificant character, that becomes sort of an
obstacle by the name of Leah. She doesn’t fit. Not in her father’s plan. Not
in Yaakov’s plan. Not in Rachel’s plan. She basically doesn’t belong. This is
not her story. But HaShem had a different opinion on the matter so He made this her story.

Lavan was an idol-worshiper and his family were idol-worshipers.
And along comes this nephew that is in love with his beautiful daughter, Rachel
and claims to serve El Shaddai and wants to marry Rachel. And Lavan pretends to
agree, but before the wedding he switches Rachel with Leah, his older ugly
daughter. In the morning Yaakov sees he’s married to the unwanted and demands
his right to marry Rachel. The rest is history.

When this man with weird ideas comes along, the only one
that actually pays attention is Leah. How do I know? Because we know from later
on in the story, when Yaakov runs away from Lavan, that Lavan chases after him
only because he wants his idols back, and Rachel is the one that stole those
idols and took them with her, thus proving that his talk of HaShem meant close
to nothing to her and her father. But Leah? Leah payed close attention to
Yaakov’s words and she chose to pray to this God that Yaakov talked about. How
do I know that? Because of how she acknowledges Him in her life and how she relates to Adonai but even better, because
of how Adonai relates to her.

She was unloved and unwanted, but Adonai loved her and
Adonai paid close attention to her grief and broken heart. And Adonai gives her
a son and she names him Reuven (see son) because she learns that Adonai has seen
her humiliation. And Adonai gives her a second son and she names him Shimon
(hearing) because she learned that Adonai heard she was unloved and took pity
on her. And a third son, Levi (joining) because she can’t help but hope that
her husband will care for her. By the time she conceives her fourth son, Leah
learns the lesson HaShem is teaching her and gives up on wanting to be
accepted, wanted or loved and just praises Adonai calling her baby, Yehuda.

I find comfort in Leah’s story. Not because it’s the story
of an underdog that had succeeded against all odds. That’s not what Leah’s
story is about. Her story is about someone whom no one wanted, except HaShem.
Someone that didn’t belong anywhere, so HaShem made room in Himself for her. That’s
not dramatizing things, it was a fact. In fact, HaShem wanted this unwanted woman so
much, that He decided to give her the priestly tribe and the kingly tribe, Levi
and Yehuda and later on even Yeshua min Natzeret (Jesus of Nazareth) ben Ha
Elohim (Son of God) through the tribe of Yehuda. HaShem had bigger plans for
Leah than Leah had for herself. 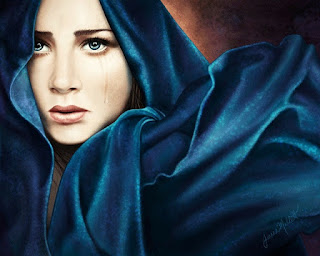 I find Leah’s journey inspiring because I’ve been her. Not
in the details of her marriage but in her thought process. I felt for the
longest time like I don’t belong anywhere. And when HaShem found me and took pity
on me, I thought like Leah through every little accomplishment, ‘now people
will like me, now, people will accept me, now for sure they will see me’. But the
lesson wasn’t about HaShem making people like me, but about me learning that
HaShem sees even my hidden tears and that HaShem hears, even the payers I don’t
dare to whisper.

It took me a long time to get from “see what Adonai did for
me! Like me for it!” to “you know what, whether people see me or not, whether
people like me or not, I will live my life praising Him.”

I spent the longest time envying all the Rachels of this
world, because they had to do nothing except breathe and they were loved and
accepted, but that’s because my eyes were weak like Leah’s. (Gen. 29:17) I
couldn’t see from HaShem’s perspective. But once I stopped looking at people
for their approval and love, I found that I am more loved than I can
understand.

Wherever you are in your walk with Adonai, whether you’re
still looking for acceptance or giving up of ever getting it, just know that
one day, when you cease to cry and your eyes won’t be weak anymore, you’re
going to see and know beyond the shadow of a doubt that you are loved and when
that day comes, praise Adonai! –  He
loved you so much that He gave you Yeshua.