The patriarch of the three Abrahamic religions is the prophet Abraham, from which Judaism, Christianity, and Islam all claim a shared ancestry. This story about him begins in Mesopotamia at the beginning of the Middle Bronze Age (c. 1900 BC), when Abram (Abraham’s name before God changed it) was called by God to become the original founding father of his people.1

Most Christian Bible studies focus only on Abraham and his son Isaac and how that bloodline leads to Jesus Christ, but this study will focus on his first son, Ishmael, for it is through him that the Arab people and eventually Islam began. The story of Abram, including the birth of his sons, spans Genesis 15 – Genesis 22 and these chapters should be read for proper context, but here is a summary of the important details for our study.

God appeared to Abram in a vision and told him his reward for being a righteous man would be great. When Abram sadly stated the fact he had no children to pass on this reward, God said that he would provide a child, then had him look up at the night sky and said, “Look toward heaven and count the stars . . . so shall your descendants be” (Genesis 15:5).2 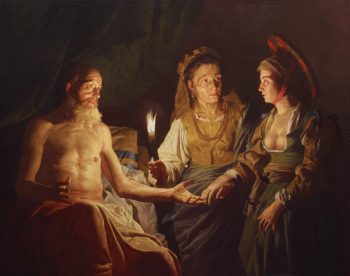 After ten years pass, and still childless, Abram’s wife, Sarai, began to doubt God’s promise. She assumed God was preventing her from becoming pregnant, so she took it upon herself to make an arrangement to give Hagar, her Egyptian handmaid, to her husband. During that time and place, it was a custom that when a wife failed to produce an heir for her husband, she could provide him a concubine for that purpose, although under that arrangement, any son born of the union of husband and concubine was considered the child of the mother, not the father.3

Hagar did conceive and, by way of an angelic message, was told her offspring would be great in number. She was told, “you shall bear a son; you shall call him Ishmael . . . he shall be a wild ass of a man, with his hand against everyone, and everyone’s hand against him; and he shall live at odds with all his kin” (Genesis 16:11–12). When Ishmael was born, Abram was 86 years old.

About 13 years later, when Abram was 99 years old and his wife Sarai was 90, God appeared to him again and told him several things: his name was being changed to Abraham, his wife’s name was being changed to Sarah, and Sarah would bear a child whose name was to be Isaac. And God made a promise to Abraham and his offspring, to give them all the land of Canaan forever, and he would be their God (Genesis 17:8). In return for this promise, and to be a visual sign of the covenant, God said, “Throughout your generations every male among you shall be circumcised when he is eight days old” (Genesis 17:12). Concerning Sarah he said, “I will bless her, and moreover I will give you a son by her. I will bless her, and she shall give rise to nations, [and] kings of peoples shall come from her” (Genesis 17:16).

In due time, Sarah had her child and he grew and was weaned at about three years of age. Later she saw her son, Isaac, with Hagar’s son, Ishmael, “But Sarah saw the son of Hagar the Egyptian, whom she had borne to Abraham, playing with her son Isaac” (Genesis 21:9). When this happened, she demanded of Abraham, “Cast out this slave woman with her son; for the son of this slave woman shall not inherit along with my son Isaac” (Genesis 21:10).

Why was she so furious that Ishmael was playing with Isaac? Was it jealousy or was there another reason for her angry response? It would seem that just playing with her son would not have been anything unusual. The word “playing”4 in verse 21:9 has been translated in different ways in various Bible versions,5 (e.g., mocking, laughing at, make sport, or making fun of) and could even be “fondling,” as indicated in a well-known Bible encyclopedia,6 and a popular Bible lexicon implies it can even suggest “conjugal caresses.”7 The Bible is filled with euphemisms, those inoffensive expressions which are substituted for one that is considered offensive, so we must ask if that is the case here. Was Ishmael molesting Isaac?

Even the Apostle Paul implied harassment of Isaac.

In the New Testament, as the Apostle Paul was explaining an allegory of Hagar and Sarah, he states that Isaac and Ishmael were not engaged in just some harmless play,8 when he said, “Now you, my friends, are children of the promise, like Isaac. But just as at that time the child who was born according to the flesh persecuted the child who was born according to the Spirit, so it is now also” (Galatians 4:28–29). Using the word “persecuted” is quite a bit different than just “playing.” 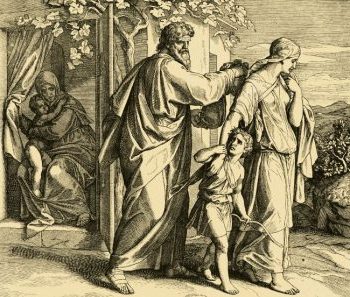 Although Sarah’s demand was heartrending to Abraham, God told him, “Do not be distressed because of the boy and because of your slave woman; whatever Sarah says to you, do as she tells you, for it is through Isaac that offspring shall be named for you. As for the son of the slave woman, I will make a nation of him also, because he is your offspring” (Genesis 21:12–13). So, Abraham sent them away and Hagar and Ishmael went to live in the Paran wilderness of the Arabian Peninsula where Ishmael became an expert hunter. His mother found him an Egyptian woman for a wife and he became the father of the Ishmaelites,9 from whom the Arab people began10 and from which eventually came the Islamic religion.

Even though the importance of Ishmael’s place in history is extensive (the great Arab nation), there is not a whole lot more later said about him in the Bible, except for a few scant facts. Genesis 25:9 indicates that when Abraham died, both Ishmael and Isaac together buried him. Ishmael’s genealogy is listed in Genesis 25:12–18, as well as his life span (137 years). Also the Bible records, in Genesis 28:9, that Isaac’s son, Esau, married one of Ishmael’s daughters.

Now remember, before Ishmael was born, an angel told Hagar that her son would be “…a wild ass of a man, with his hand against everyone, and everyone’s hand against him; and he shall live at odds with all his kin” (Genesis 16:12). A well-known reference work states the following concerning this verse.

“The wild-ass is a wayward, intractable creature, whose home is the prairie…Ishmael, like many of the other characters in [Genesis], is an impersonation of his descendants; and…here a true and picturesque description…of the life led by them to the present day: now, as ever, they are the free and independent sons of the desert, owning no authority save that of their own chief, reckless of life, if occasion demands it, ever ready to plunder the hapless traveller who ventures without permission within their domain.”11

Author Herbert Lockyer wrote, “The casting out of Ishmael has been productive of bitter fruit, surviving in the religion of Mohammed. The wild hearts beat on in bosoms of those who form the Arab world. Little did Sarah know when she persuaded Abraham to take Hagar that she was originating a rivalry which has run in the keenest strife through the ages, and which oceans of blood have not stopped.”12 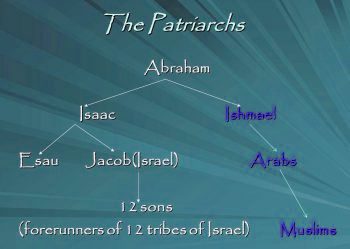 Jews originated as an ethnic and religious group in the Middle East during the second millennium B.C.,13 and much later the first Christians evolved from the influence of Jesus of Nazareth during the first century A.D. Now fast forward again to 610 A.D. and we find a new religion emerging among the Arab people (that great nation promised through Ishmael). This religion is called Islam. Many sources state that Islam means “peace”, but the truth is that it means “surrender” or “submission.” However, in an entirely religious context the word Islam could mean the surrendering of one’s will in an effort to achieve peace.14

Islam was preached by Mohammed,15 who considered himself the final prophet of God. In 607, Mohammed stated that he began receiving revelations through visions from the archangel Gabriel, and these revelations made up the religious text of the Quran, the Islamic holy book. “Mohammed created a religion fashioned after Judaism, about which he had a moderate knowledge.”16

In the Islamic version of the Abraham story, it was through Ishmael, not Isaac, that God’s people would receive all the land of Canaan, and give rise to many nations and kings. Mohammed had tried to convert the Jewish people to his way of thinking, but they refused and that caused a great hatred to develop. “Mohammed never got over his anger, humiliation, and rejection by ‘the people of the book’17 and fought battles with them. He went to his grave tormented and obsessed that some Jews were still alive. On his deathbed, Mohammed entrusted Muslims to kill Jews wherever they found them, which made this a ‘holy commandment’ that no Muslim can reject.”18

The Arab people continued to became Muslims and, by the time Muhammad died in the year 632, most of western Arabia was Muslim. Within two more years, the entire peninsula was mostly consolidated into the Islamic faith and by 638, the Christian cities of Syria and Palestine, including the prized city of Jerusalem, fell to the Arabs through war.19 Just for the record — to be correctly used — “Islam” or “Islamic” should only describe the religion and its subsequent cultural ideas, whereas “Muslim” should only be used to describe the followers of the religion of Islam.20 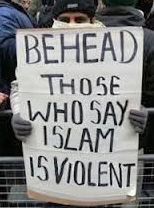 The Islamic movement continued to grow and, eventually, became a major religion. By the time the Crusades began, Islam had spread across North Africa, the Mediterranean Sea to the Iberian Peninsula, and the nomadic lands bordering the southern boundary of the Eastern Roman (Byzantine) Empire. And despite its rapid spread, it was far from being a truly united force.21 There were widespread disagreements and violence with the Christian nations, as well as among other Arab people and, of course, the Jews. This Muslim bitterness was just like the description of the person from whom the Arabs descended, as written in Genesis 16:12.

This study has more details about Ishmael than one previously written about this subject, some time ago. However the original article has more information concerning reasons for the Crusades, and about Muslim pirates and their attacks on Americans as far back as the 18th and 19th centuries; see the listing in “References & Notes” below.22