Kim sent out this Christmas letter and I asked if we could post it right here:

Christmas is, for me, a haunted home. The tree is enchanting, the ritual of present-exchange delightful, the meals cornucopian, the egg nog ambrosial – but the ghost of Herod is generally crashing the celebration, the memory of the Massacre of the Innocents (Matthew two:16) ever souring my sweet dreams of peace. There is practically nothing so dead in all the planet as murdered young children.

The theologically feral novel The Gospel According to Jesus Christ by the Portuguese Nobel Prize winner José Saramago guarantees that the spectre and the recollection persist. In a psychologically probing retelling of the Nativity narrative, Joseph overhears a conversation in between two soldiers that alerts him to Herod’s diabolical plans and propels him to rescue his wife and kid. In the aftermath, on the other hand, Joseph is plagued by the believed that he could have and really should have warned other parents of the impending slaughter, and for the rest of his brief life the father of Jesus will have nightmares that he is top soldiers to kill his son.

This year’s Christmas painting then: Pieter Bruegel the Elder’s The Massacre of the Innocents. 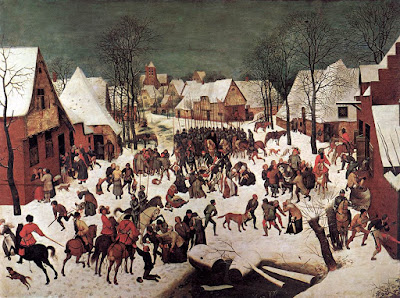 Multiply narrated and theatrically staged – replete with marauding soldiers, protective fathers, distraught mothers, and solicitous villagers (and terrific touches like the soldier in the left background, opposite the cohort, pissing against a home) – the painting is specifically modern for becoming, in reality, a bowdlerisation. For scientific examination demonstrates that the original was a lot far more explicit and detailed in its portrayal of the atrocity, re-contextualised by Bruegel as a 16th-century Flemish war crime executed by Spanish soldiers and German mercenaries. All as well close to the bone for the Holy Roman Emperor Rudolf II, who ordered his royal artisans to give such “fake news” a paint-more than, airbrushing and altering the mass infanticide into a scene of far more quotidian pillage.

Plus ça transform, appropriate? But hush, young children, what’s that sound? Do you hear it? The Shaker of Nations confounding the nabobs of nihilism in Mary’s feisty protest song:

He bared his arm and showed his strength,
scattered the bluffing braggarts.
He knocked tyrants off their higher horses,
pulled victims out of the mud.
The starving poor sat down to a banquet
The callous wealthy have been left out in the cold.
(Luke 1:51-53, The Message)

A Christmas toast, then, to the exorcism of Herod’s ghost, and – it is the 5th anniversary of the Massacre at Sandy Hook – a New Year hope for the finish of Moloch worship and the downfall of his higher priests Smith &amp Wesson.

As for Joseph’s guilt, on the other hand – let alone for Rachel’s grief (Matthew two:17-18) – no false consolation. Rather collective remorse and mourning, and the perennial prayer of the desperate soul: “Lord, have mercy! Come, Lord Jesus, come!”

God bless you in the Kid.