“Behold, my servant shall act wisely; he shall be high and
lifted up, and shall be exalted.

As many
were astonished at you—his appearance was so marred, beyond human semblance,
and his form beyond that of the children of mankind—so shall he sprinkle many
nations.

Kings shall shut
their mouths because of him for that which has not been told them they see, and
that which they have not heard they understand.” (Isaiah 52:13-15)

This past week I’ve
been thinking a lot about the Face of Adonai. I’ve heard people pray many times
to see the Face of God. I always wondered if they were aware of what they were
asking. I think they imagine some apparition or manifestation and blinding
lights. Maybe they imagine an experience like Moshe (Moses) had when he asked
to see HaShem’s glory. And it seems to make some think that wishing for that is
a sign of the freedom we have now in HaMashiach (The Christ).

When Moshe asked to see HaShem’s glory, he didn’t ask to see
His face. HaShem just told Him “you cannot see my face, for man shall not see
me and live” and “you shall see my back, but my face shall not be seen.”
(Shemot/ Exodus 33:20;23)

It seems to be implying that His back is more glorious,
appealing to our senses that crave to be astonished. Seeing His face on the
other hand, would kill us. And I don’t think that is because of overexposure to
awesomeness. I think it has a deeper meaning than that.

When Yeshayahu (Isaiah) prophecies about Yeshua, the
embodied manifestation of HaShem (Col.1:15), he says in chapter 53:2-3: 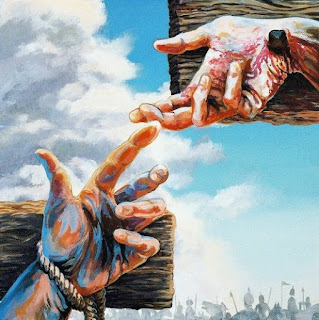 One might think “oh, those Jews! They saw Yeshua and
despised Him! If I would have been there I would have died with Him! Awful Jews
despised what they saw and rejected Him!” You’d like to think so, huh? Well I’ve
got news for you: if you or I would have seen Him hanging on a cross giving His
last breath, it would have ruined our faith. Before blaming the Jews, one needs
to remember that Yeshua’s closest followers lost hope when they saw Him on that
cross. Why? Because the human heart doesn’t need a God that appears weak and
powerless. As a matter of fact most people that lose faith in HaShem, they do
so because HaShem wasn’t what they thought He was, or He didn’t answer some
prayer, or didn’t intervene in some situation or didn’t perform some miracle,
you know, like He’s supposed to! A God that seems weak is useless to the human
understanding. We need a God that is strong, in our way of understanding
strength and all-powerful as in He’ll give me anything I ask for because He
loves me.

I have seen people that seem to have every prayer answered
and every desired fulfilled and it inspires others to do everything that
person is doing hoping for the same results. And it’s not necessarily wrong,
but I think that HaShem’s face is revealed in situations where people think He’s
hiding His face for sure, because this can’t be it! 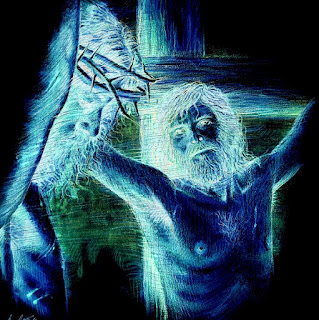 It reminds me of the thief on the cross. I think He was the
first one that looked, and I mean truly looked Adonai in the face, amidst all
those wrong circumstances that pointed out “THIS CAN’T BE GOD!” and saw Him
for who He was. The thief wasn’t seeing someone dressed in splendor and light,
wasn’t seeing some miracle performed, wasn’t seeing a King… He was seeing
someone that made all those that looked upon Him turned their face away. But
the thief did something so God-like that is astonishing in its simplicity. He
doesn’t look at the outward appearance, but looks at the heart. Adonai does
that. When He chose David HaMelech (King David) HaShem told Shamuel “For the
Lord sees not as man sees: man looks on the outward appearance, but the Lord
looks on the heart.” (1 Sam. 16:7) The thief looks at Yeshua and sees
everything that disqualifies Him to be HaMashiach (The Anointed) but he sees
His heart and asks “Yeshua, remember me when you come into your kingdom.” (Luke
23:43)

I know some like to use the story of the thief as an example
that it’s never too late to believe in Yeshua, and that might be one way to
look at it, but I think that the main lesson to learn from this is, to not let
your eyes be fooled by what you see and how Adonai might appear in your current
circumstances. It might seem like He’s not able to help you in any way, shape
or form, because if He could He would have done it by now, but maybe, just
maybe, if you choose to look at His heart for you, instead of whatever it is
that makes Him appear weak in your eyes, you might just see the Face of God.