And God blessed them, and God said unto them, Be fruitful, and multiply, and replenish the earth, and subdue it: and have dominion over the fish of the sea, and over the fowl of the air, and over every living thing that moveth upon the earth. (Genesis 1:28, KJV).1

Over the years, I’ve been asked many times about the wording of Genesis 1:28 (and similar verses) in The Authorized Version of the English Bible (commonly called The King James Version), which seems to imply that there was a previous civilization on earth, before the one started by Adam and Eve. “If not,” I’m asked, “why does God tell them to replenish the earth?” The people that ask this question are in good company, because even scholars and academics have asked this same question for more than two hundred years.

At the end of the 1700s and during the 1800s, when the scientific study of geology became firmly established, intellectuals “determined that the Earth was far older than common interpretations of Genesis and the bible-based flood geology would allow.” The religious geologists (the majority at that time) found need to “reconcile their faith in the Bible with the new authority of science.”2

Since Creationism theorizes a six-day production period, they needed a solution to explain the new scientific observations involving the age of the earth and the new large animal and exotic plant fossil records being discovered. A new concept of gap Creationism or ‘Gap Theory’ evolved. Simply put, “there was a gap of time [millions of years] between two distinct creations in the first and the second verses of Genesis.” A previously created civilization grew and was then supposedly destroyed. Needless to say, this Gap Theory was a perfect explanation for the need to have Adam and Eve replenish the Earth, as stated in Genesis 1:28. 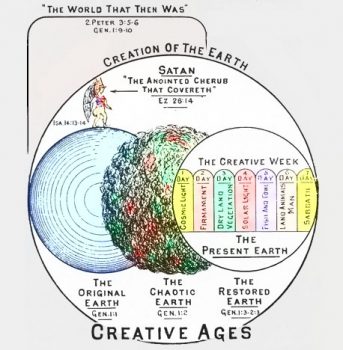 This Gap Theory was very popular at the beginning of the twentieth century and was promoted by C. I. Scofield’s The New Scofield Reference Bible. Scofield’s notes suggested Genesis 1:1 relates to a prior creation ruled by Satan before his fall. This “had the advantage that it allowed for the universe and earth to be old, but the days of Genesis to be recent. Anything that did not fit into a recent earth (e.g., geological strata, dinosaurs) could just be shoved back into the first creation.”3 Now it appears, to some extent, that this Gap Theory is resurfacing within certain modern churches.

Author Bert Thompson suggests that the Gap Theory was first publically proposed in 1814 by Scottish theologian Thomas Chalmers, who suggested that a “vast ‘gap’ of time should be inserted between Genesis 1:1 and Genesis 1:2, and that during this indeterminable amount of time there lived and died an entire pre-Adamic world, complete with plants, animals, and even pre-Adamic races of people.” There are several scholars who have suggested pre-Adamic populations, including J. Sidlow Baxter who believed in a pre-Adamic rebellion involving angels.4

“More contemporary proponents of the gap theory were well-respected Bible teachers Dr. J. Vernon McGee (1904 – 1988) of Thru the Bible [radio programs], as well as Pentecostal televangelists Benny Hinn and Jimmy Swaggart.”6 John Walton wrote that everyone was trying to “reconcile the scientific findings about the material cosmos with the biblical record without compromising either. They all assume that the biblical account needs to be treated as an account of material origins, and therefore that the ‘different’ scientific account of material origins poses a threat to the credibility of the biblical account that has to be resolved.”7

Not everyone was jumping upon this opportunity to justify long-held Bible beliefs. Celebrated scholar Charles Ryrie, summed up the confusion by stating it this way, “The gap concept does not rest on solid exegetical grounds. The fact that it became popular about the same time as geology came on the scene makes one suspect that it gained acceptance because it easily accommodates the findings of uniformitarian geology” [see note].8

Now, it is only fair to offer a slightly different version of the “Gap Theory,” one that was taught by author and Bible teacher Chuck Missler (1934-2018). He said there was evidence elsewhere in the Bible of a gap in time, implying two separate earthly creations. Using verses in Isaiah, Jeremiah, and the Psalms, he implied some Hebrew words were inaccurately translated.

He also suggested that verses in Jeremiah 4 were a proof of God’s anger causing the first creation to be destroyed. “I beheld, and, lo, there was no man, and all the birds of the heavens were fled. I beheld, and, lo, the fruitful place was a wilderness, and all the cities thereof were broken down at the presence of the LORD, and by his fierce anger” (Jeremiah 4:25-26, KJV).

I always thought Missler gave very good arguments in his speeches and sermons, but there were some people that believed some of his thoughts did not fit the context of what was meant in the Bible. I assumed that his intention was to give people something to think about. For those that want to pursue a brief example of his explanation on Gap Theory, see the reference at the end of this article for a short video.9

There are various other theories, relating to the Genesis creation account, besides the Gap Theory and the current popular idea of God’s days being much longer than six literal 24-hour days. But our study is only concerning why God states, very plainly, “replenish the earth.”

Why has this problem only surfaced recently? 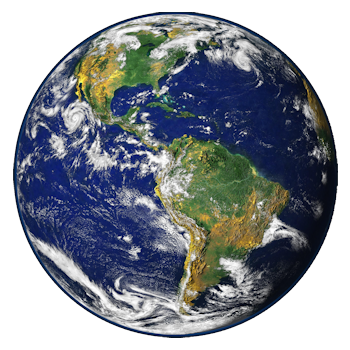 If this word “replenish” has only been a problem since the science of geology brought it to the forefront within the last few hundred years, why was it not found to be a problem before then? Could it be that it is a translation problem?

Creationist and author Henry Morris gets right to the point in saying, “The King James translation used the term ‘replenish,’ but this does not suggest the idea of ‘refilling,’ either the Old English term itself or the Hebrew word from which it is translated. The Hebrew word . . . means simply ‘fill,’ ‘fulfill,’ or ‘be filled’ . . . It is certainly erroneous to use this one verse as a proof text for the gap theory, as many have done.”10

Examination of the Oxford English Dictionary “shows that the word was used to mean ‘fill’ from the thirteenth to the seventeenth centuries. In no case quoted in these five centuries does it unambiguously mean ‘refill’.”11 In Noah Webster’s 1828 dictionary, American Dictionary of the English Language, it gives the definition of replenish as: “To fill; to stock with numbers or abundance. The magazines are replenished with corn. The springs are replenished with water. ‘Multiply, and replenish the earth,’ Genesis 1.”12

There are seven times in the King James Version where the words replenish or replenished are used, and each time it means “fill” or “filled” (Genesis 1:28, Genesis 9:1, Isaiah 2:6, Isaiah 23:2, Jeremiah 31:25, Ezekiel 26:2, Ezekiel 27:25). There are plenty of other versions that do the same in some or most of these instances.13 So, although today the word replenish is commonly used to mean refill, that just wasn’t what it meant a long time ago. Strong’s dictionary indicates that the greatest number of uses of the Hebrew word used in ancient manuscripts means to fill.14

Most modern Bible translations used today use the English word fill, instead of replenish. “God blessed them, and God said to them, ‘Be fruitful and multiply, and fill the earth and subdue it; and have dominion over the fish of the sea and over the birds of the air and over every living thing that moves upon the earth’” (Genesis 1:28, NRSV). Also, see similar use in: ESV, NET, NKJV, NLT, RSV.

The evidence has been presented and it is your choice as to what to believe. But for me, at this time, the word “replenish” in Genesis 1:28 (and similar verses) printed in The King James Version, as well as some other versions, definitely means “fill.” While I truly believe that science is not the enemy of faith and that science and Christian doctrine can be accommodated together, this does not mean that twisting scripture to fit current scientific theory, is the way to do it.